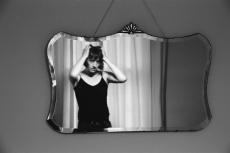 ‘Waste Land’ is the culmination of a five-year project, which comprises twelve photographic and video installations derived from T. S Eliot’s 1922 poem. By utilising adaptation as autobiography, Waterman emotionally embodies the text, appropriating particular lines, concepts or images from ‘The Waste Land’ into her own fragmented narratives or adopting them as titles for the works themselves. Indeed, through the transformative methods of constructed narratives, metaphorical landscapes and performative re-enactments, the ‘Waste Land’ project became an attempt to work through the marital breakdown and divorce of Waterman’s parents and her subsequent estrangement from her father. Therefore, the five distinctive sections of Eliot’s poem represent different stages of the artist’s self-examination of this family trauma, obtained through the therapeutic visualisation of repressed memory.

Serving as a meditation on the past and on the importance of place, each of the works are filmed either on the artist’s childhood home of the Isle of Wight, her current residence in London, or symbolic sites of her imagination. Waterman adopts elusive modes of self-representation in order to situate herself apart from the audience, appearing as an anonymous figure or a ghostly trace. This multiple, shifting female subjectivity is reinforced through subversive, stylistic techniques of superimposition, speed adjustment and repetition that acknowledges the poem’s modernist context and bricolage structure.